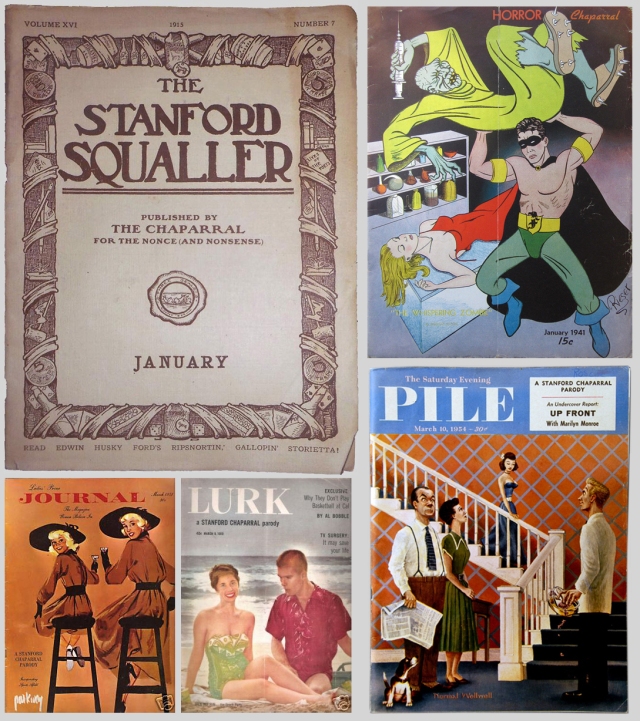 The Stanford Chaparral was the first successful college humor magazine outside the Ivy League. Recent grad Everett W. Smith and senior Bristow Adams put out the first issue in October 1899; they also gave the magazine its mascot:  a middle-aged jester in Harold Lloyd glasses called “the Old Boy.” In 1905, Judge’s Monthly listed the Chaparral and its nearby rival the California Pelican (b. 1901) among the best-known college magazines. Both remained fixtures of Top Ten polls for sixty years. 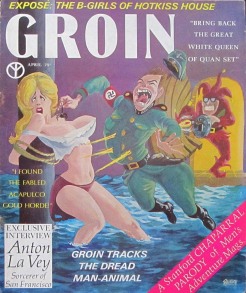 Other magazines envied the Chaparral for its plentiful advertising, professional appearance and frequent parody issues. In the April 1903 “woman’s edition,” the all-female staff briefly parodied the Ladies’ Home Journal and the campus literary magazine, the Sequoia. What may be the first issue-length parody was another Sequoia, dubbed the “Squaller,” in January 1915. “Chappie has secured a new costume,” the Daily Palo Alto wrote, as if introducing readers to an unfamiliar concept. “It is the business suit of the Sequoia. The new garments, exterior and interior, are to the exact style and cut of those of his red-jacketed companion, for his whole get-up will be a jocose though satirical impersonation.” 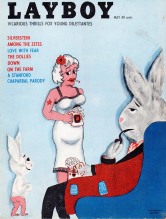 The golden age for Chaparral parodies was the 1950s, which was also the heyday of Life, Look, the Saturday Evening Post, Holiday and other large-format, lushly illustrated sitting ducks. The Chaparral couldn’t match their production values, but it came closer than most college mags, especially in “Lurk” (Look) and the “Saturday Evening Pile” (the Post). The most notorious parody was 1961’s “Layboy,” a mock Playboy that got editor Brad Efron suspended and the Chaparral shut down for the rest of the year. The unluckiest was a 1981 spoof of the San Francisco Chronicle’s Sunday magazine, Datebook. Playing off the popularity of Dallas, “Datebook’s” cover asked “Who Shot RR?” over a photo of President Reagan in a cowboy hat. The magazine went on sale at 9 a.m. local time on Monday, March 30, one hour before Reagan was shot for real in Washington, D.C. 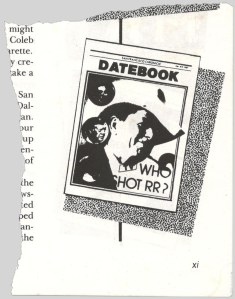 Like most campus mags, the Chaparral sputtered and stalled in the 1960s. Unlike them, it kept going, though its claim to be “the nation’s second oldest continually published humor magazine” (after the Lampoon) is a stretch: In addition to the 1961 “Layboy” hiatus, the Chaparral abandoned humor for radical politics in the Nixon era, and in the ’80s it sometimes appeared only once or twice a year. The Chaparral last made national news in 2004, when its outside-the-box parody of “A Pile of Paper” —  bills, restaurant menus, lottery tickets, etc. — was written up in The New Yorker. More recent sightings are scarce. The magazine’s Twitter account has been dormant for two years, and the most recent issue on its website, stanfordchaparral.com, is dated Sept. 2005.

This list includes all the Chaparral parodies I know of, including those of other campus publications, but it’s far from complete. I’ve used dots (….) to show the longer gaps and would appreciate help filling them. Most of the info comes from the Stanford Daily archive (online here), The Stanford Chaparral Inaugural Century (Stanford Chaparral, 1999) and my own collection.

I'm a semi-retired freelance cartoonist in Durham, N.C., who's been collecting newspaper and magazine parodies for over 50 years.
View all posts by Cullum Rogers →
This entry was posted in College Parodies and tagged College, Stanford Chaparral. Bookmark the permalink.