Cover and page 2 of the Yale Record’s “Smut.”

“Smut,” which appeared as an oversized insert in the February 1951 Yale Record, might strike current readers as a general spoof of early-’50s newsstand sleazery. In fact, it faithfully apes a short-lived subset of men’s mags with names like Hit!, See, Laff and other punchy monosyllables. These titles borrowed their size and format from Life and sometimes claimed to be picture newsmagazines, but their true forebears were the Police Gazette and interwar gags-and-gals books like Captain Billy’s Whiz-Bang and the Calgary Eye-Opener. Their habitats were all-male environments like barber shops and fraternity houses, and their main draws were pictorials centered on the doings of strippers, bathing beauties, lingerie models and other females willing to show some leg. Such educational features were surrounded by dubious mail-order ads, suggestive cartoons, he-man tales of the “Weasels Ripped My Flesh” variety and shocking exposes of the Rich and Famous. All but the cartoons are gleefully mocked in “Smut.”

The real things: Hit!, Night and Day, See and Taboo.

The Record normally disdained the crude sexual humor found in most of its non-Ivy contemporaries, but it loosened up a bit in parody issues; hence “Smut’s” inclusion of a feature called “Model Makes Good,” credited to a reporter named “Henry Good.” (Groan.) The puns are no better in an eyewitness report on the “Man-Eating She-Devils of Yukuku,” but they blend with the story’s non sequiturs and B-movie clichés to form a rich stew of collegiate nonsense.

A look “Backstage at the Smokahavana” (a nod to New York’s Copacabana) serves as the obligatory nightclub feature. Its chorines are a bit too fresh-faced and fully clothed to pass for hard-bitten showgirls, but the leering captions supply a depravity missing from the photos: Asked if she’s adjusting her falsies, hard-bitten “Fifi” answers, “Whaddaya think? I’m packin’ a lunch?” 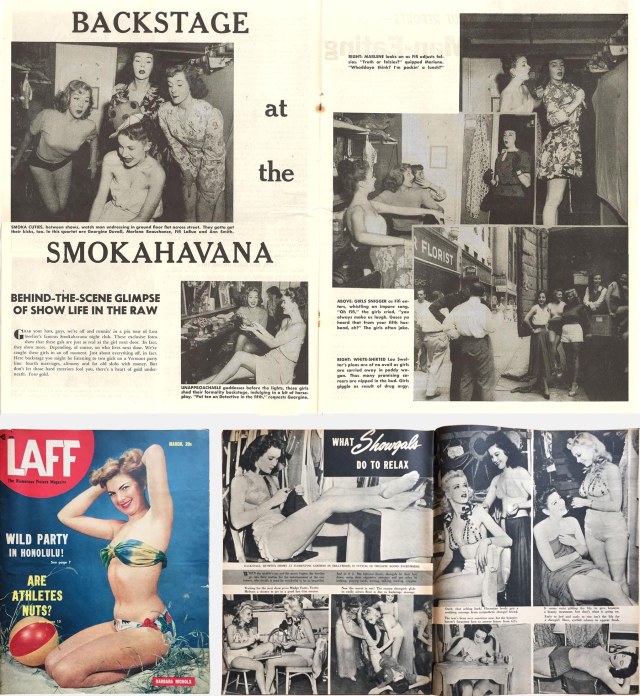 Within a few years of “Smut’s” appearance, most of its targets had fallen victim to changing tastes and increased specialization. The success of Confidential, founded 1952 by girlie-mag veteran Robert Harrison, sparked a trend that soon glutted the market for celebrity dirt. Meanwhile, dozens of new titles like Stag, Male, Man to Man and Men supplied vicarious thrills for WWII vets now juggling kids and mortgage payments.

The fatal blow came with the rise of Playboy, whose sophisticated airs and carefully retouched foldouts made the “candid” black-and-white shots in See and its ilk look both low-rent and prudish. The girlie pulps found themselves boxed in: too vulgar for respectable outlets and advertisers, too tame for fans of hard-core raunch. By the time “Smut” was anthologized in 1961’s College Parodies, the type of barbershop reading it satirized had gone the way of the 25-cent haircut. — VCR

I'm a semi-retired freelance cartoonist in Durham, N.C., who's been collecting newspaper and magazine parodies for over 50 years.
View all posts by Cullum Rogers →
This entry was posted in College Parodies, College: 1946 on and tagged 1950s, College, Yale Record. Bookmark the permalink.