Every so often, a magazine develops an unexpected craving for parodies, features them for a few years, then moves on. Take Esquire: Starting with “BeCause” in 1962, over the next 12 years it parodied Mad, Scientific American, The Saturday Evening Post, Ms. and People. It also imagined some unlikely newstand nuptials (“I, Playboy, take thee, Reader’s Digest…,” August 1965) and swiped Playboy’s “Interview” format for a chat with Hugh Hefner (December 1970). The most elaborate take-off ran in the December 1969 issue: an eight-page preview of The New York Times for November 8, 1976. One prescient feature caught up with former President Nixon, who had resigned halfway through his second term. 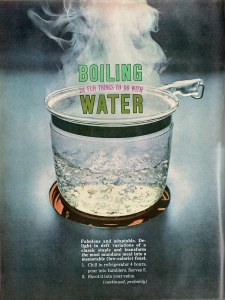 Fun with water in “BeCause.”

Esquire’s editor for most of this period was Harold Hayes, who had edited the student magazine at Wake Forest in the late ’40s, but the uncredited brains behind “Ladies Whom BeCause” were most likely David Newman and Robert Benton, two young editors who worked well as a team and had similar senses of humor. (They later went to Hollywood and grabbed the brass ring on their first try with the screenplay for Bonnie and Clyde.) Newman cut his editorial teeth at the Michigan Gargoyle in the mid-’50s, and Benton was a veteran of the Texas Ranger. They handled Esquire’s annual college issue and came up with a number of college-mag-like features, including the Dubious Achievement Awards and the March 1967 parody, “Sceintific [sic] American.”

As its name suggests, “Ladies Whom BeCause” is a mash-up of Ladies’ Home Journal and McCall’s, mostly the latter. Founded in 1873, McCall’s was the oldest of the “seven sisters” women’s magazines* but consistently played second fiddle to the Curtis Publishing Company’s Journal. That changed in the late 1950s, after art director Otto Storch gave McCall’s a major redesign emphasizing full-page illustrations closely integrated with headlines and text. “Mr. Storch used a variety of photographic processes to make type twist, turn and vibrate in the days before computers made such special effects commonplace,” Steven Heller wrote in Storch’s New York Times obituary. The look was widely imitated and proved popular with readers; in 1960, McCall’s passed the Journal in circulation for the first time ever. 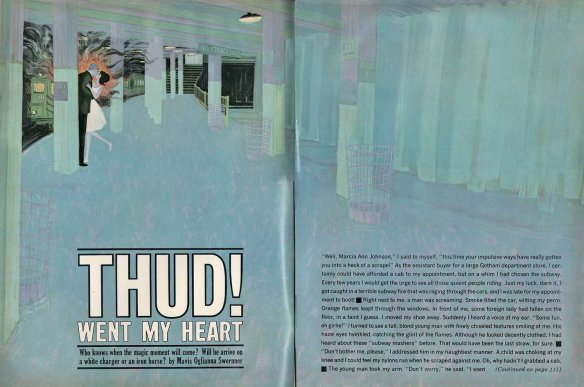 John McCray’s double-page pastiche of illustrator Brian Sanders in “Ladies Whom BeCause.”

Real Sanders art from the ’60s.

Like its targets, Esquire was Life-sized in the ’60s and had room to mock these innovations in all their wide-screen splendor. An article titled “22 Fun Things to Do With Boiling Water” deploys a few skimpy lines of text on a full-bleed photo in a triumph of presentation over content. That goes double, literally, for John McCray’s two-page illustration for the inevitable boy-meets-girl short story, where the central couple almost disappear in a gray-green subway station painted in the classic ’60s style of Brian Sanders. (Sanders’s art is so closely associated with the era that AMC hired him forty years later to do posters for Mad Men.) 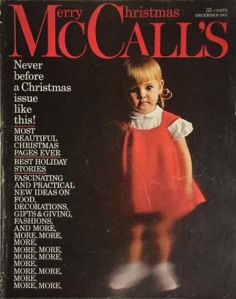 Not all the jokes are visual. “What is your own personal definition of an isosceles triangle?” one reader asks advice columnist “Sen. Mildred H. Pauling,” who gives an equally “personal” reply. A vacuous gossip column by “the Duchess of Mortmain and Avon” kids its targets’ longtime weakness for Big Name contributors with little or nothing to say. Even the hyperventilating cover text echoes that on the real McCall’s cover the previous December, and needs only slight exaggeration to become pure blathering giddiness. (In fairness, McCall’s editors seem to have been having the same kind of fun themselves.)

Parodists, most of them male, have been mocking magazines for women since at least the 1920s, often with a heavy overlay of clueless condescension. “Ladies Whom BeCause” isn’t free of such blemishes, but it partly compensates for them by being impeccably dressed. — VCR