The Times parodies itself, 1794

Parody Of: The Times (London). Title: “The New Times.”
Parody By: The Times — and the Tories.  Date: Sept. 6, 1794. Pages: 1.
Availability: Reprinted much reduced but still legible in The History of the Times, Volume I: The Thunderer in the Making (London: Times Publishing Co., 1935).

The earliest known parody of a specific publication was a full-page self-parody in The Times of London on Sept. 6, 1794.  Like the Boston Globe’s April 2016 vision of Donald Trump as president, “The New Times” was set in a future dominated by the worst imaginable leadership — in this case, French revolutionaries and their English sympathisers. Reformers across Europe had hailed the French Revolution in 1789, but after five years of guillotines and chaos most Britons considered it a Bad Thing. So did The Times, which was only nine years old in 1794 but had already adopted an omniscient tone and an unswerving conservatism.

“The New Times” filled all of page 3 of the four-page Times, displacing the usual news and commentary. Like The Times‘s real front page, it consisted mostly of government announcements, theatrical notices and ads. Instead of the customary lion and unicorn in the real Times‘s nameplate, “The New Times” displayed a guillotine surrounded by crossed pikes hoisting the cap of liberty and a blood-dripping severed head. The paper’s date was given as the “First Year of the Republic, one and indivisible, Saturday, June 10, 1800.”

In the 1800 of “The New Times,” pubs serve wine instead of beer, Parliament has been destroyed, and St. Paul’s Cathedral has been converted into a “Temple of Reason.” A brief notice celebrates the discovery of a method for “making bread of decayed bones,” and the shipping news blandly records the arrival of “a French brig, laden with guillotines for use of the fleet.”

The humor of “The New Times” is pitch-black and savage, and much is still funny in an Onion-like way. The dozen or so English radicals mocked by name in its columns were probably less amused, since many of them were awaiting trial for High Treason. These included the well-known polemicist John Horne Tooke and the left-leaning Unitarian minister Jeremiah Joyce, who was depicted in “The New Times” celebrating the destruction of Parliament. (Fortunately, all were eventually acquitted.) 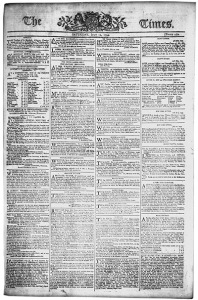 The inclusion of Tooke, Joyce and other defendants was no accident, for “The New Times” was created by the same government that prosecuted them. The parody’s author is unknown, but the official History of The Times says it was sponsored by Henry Dundas, first Viscount Melville, who was Home and War Secretary under William Pitt and head of the Tory Party’s dirty tricks division. According to scholar Marcus Wood, Pitt and Dundas “built up a propaganda machine which attempted to discredit radical thought and to magnify the dangers of radical activity.” It seems to have worked: The Tories came to power in 1783 and held it for the rest of the century.

Much of Dundas’s propaganda was slipped to friendly newspapers, who published it unaltered; in return, the papers received inside scoops, government contracts and other goodies. Times founder and publisher John Walter, for example, was appointed Printer to His Majesty’s Customs and given 300 pounds a year. “The tradition of journalists selling their consciences to politicians was old when Walter established his daily newspaper, and its age had deprived it of infamy,” the anonymous author of the History noted dryly. Infamous or not, one fruit of that tradition was the first high-profile newspaper parody. —VCR

I'm a semi-retired freelance cartoonist in Durham, N.C., who's been collecting newspaper and magazine parodies for over 50 years.
View all posts by Cullum Rogers →
This entry was posted in Britain: 1794-1920, Early Parodies and tagged 1790s, Newspaper, Self-parody, The New Times, The Times, UK. Bookmark the permalink.