Playboy has launched dozens of international editions since 1972, but only a handful of foreign parodists have returned the favor. In 1963, students at Toronto’s Queens University Law School put out a 12-page tabloid called “Lawboy.” A collection of local in-jokes printed on newsprint and seemingly laid out at random, “Lawboy” barely qualifies as a Playboy parody, but it deserves a nod as the first to circulate entirely outside the U.S.

French-language Montreal humor magazines Croc and Safarir spoofed Playboy with more panache in 1990 and 2001, respectively. Croc’s 15-page “Playbec” offered an unclothed Jessica Rabbit and an exclusive interview with the Holy Trinity (two-upping 1983’s “Playbore,” which had only Jesus). Safarir’s self-titled spoof began on the back cover with buxom singer-actress Annie Dufresne crossing her eyes behind a feather boa; she also starred in the interview-pictorial that filled six of the feature’s 12 inside pages. 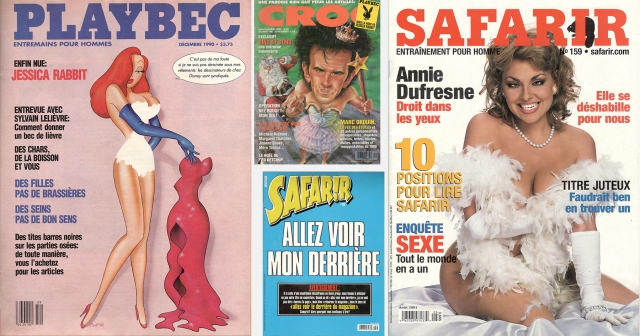 Munich writer Hans Gamber self-published more than a dozen full-length magazine and newspaper parodies in Germany in the 1980s and early ’90s, beginning with a 1984 takeoff of Playboy’s German edition called “Playbock” (literally, “play-buck,” i.e., play money). His later targets ranged from Der Spiegel to the Asterix books; the former grumbled about trademark infringement, the latter took him to court over it and won. Gamber’s last magazine parody in 1992 was a second “Playbock,” notably thinner and less polished than the first. Both mixed original content with translated pieces from U.S. humor mags, including National Lampoon and 1983’s dueling Playboy parodies. Not one to waste material, Gamber later mined “Playbock” and his other men’s mag spoofs for a best-of collection cleverly called “Playback.”

“Wookieerotica,” from Australia, is a thick, perfect-bound “1970s style men’s magazine” from the Star Wars universe that doubles as souvenir program for a similarly themed burlesque show. The stripping was originally a sideline to the parody: “Since we were creating the costumes [for the magazine photos], we thought we’d put on a one-night show for a hundred of our friends and fans,” director/editor Russall S. Beattie told the Huffington Post’s David Moye in 2018. Star Wars Burlesque debuted in 2011 and instantly sold out; a revised and expanded version has since made five Australian tours and been seen by more than 50,000 people. This past summer, the company made its U.S. debut with a new edition called “The Empire Strips Back.” 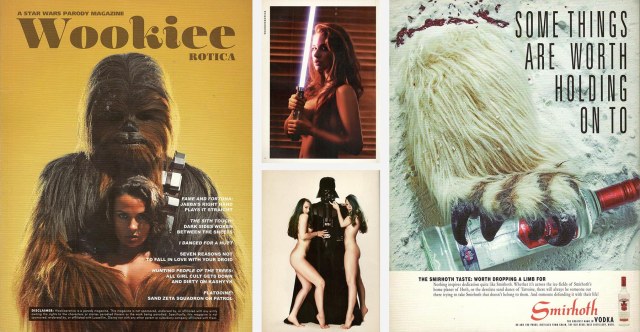 The show’s success slowed work on the magazine, but Sydney publisher Giant Panda King finally issued “Wookieerotica” in 2017 for $50 Australian ($36 U.S.). What that buys is easily the best-looking fake men’s mag ever published; over half the pages are artistic studies of the show’s performers waving lightsabers, posing nude in Admiral Ackbar masks and suchlike fan service. The ads for fake products like Imperial Strike cigarettes and Smirhoth vodka are well-observed, droll and deadpan.

“Playboy was the pinup magazine of the ’70s and I wanted that,” Beattie told HuffPo. “I wanted the articles, I wanted ads, I wanted the reviews. Now we took that, and we parodied Playboy just as much as Star Wars.” Actually, there’s very little Playboy in “Wookieerotica” beyond a few borrowed phrases and an eye for female beauty. Most of the regular columns and features are absent; those that remain look more like standard Upscale Magazine Design than anything specific to Playboy or the 1970s. Significantly, “Wookieerotica” is plastered with disclaimers that it’s “not sponsored, endorsed by, or affiliated with” anything connected to Lucasfilm or Disney. There’s nothing similar about Playboy, nor does there need to be.      — VCR

I'm a semi-retired freelance cartoonist in Durham, N.C., who's been collecting newspaper and magazine parodies for over 50 years.
View all posts by Cullum Rogers →
This entry was posted in Newsstand Parodies, Specialized Parodies and tagged Australia, Canada, Germany, Magazine, Playboy, UK. Bookmark the permalink.