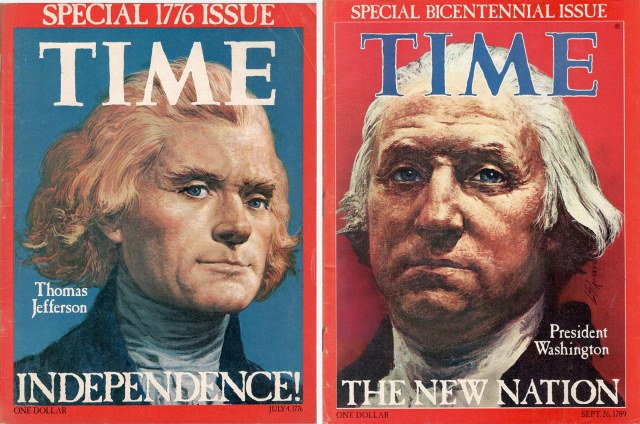 Louis Glanzman’s portraits of Jefferson and Washington on Time‘s 1975-76 specials.

In addition to bringing tall ships and fireworks, the U.S. Bicentennial in 1976 provided a perfect excuse to swell the nation’s small stock of 18th-century magazines. Time‘s special issues were the most impressive, representing two years work by 26 researchers and writers. “Independence,” dated July 4, 1776, came out in May 1975 with a vulpine Thomas Jefferson on the cover; it was sent to 4.7 million subscribers and sold 1.3 million copies on the stands. “The New Nation” did nearly as well a year later. Dated Sept. 26, 1789, it led with the start of George Washington’s administration and the passage of the Bill of Rights. Names making news in other sections include Adam Smith, Voltaire and Captain Bligh of H.M.S. Bounty. Though too straight-faced and factual to qualify as self-parodies, the past Times can’t help resembling souvenirs from an elaborate masquerade party. 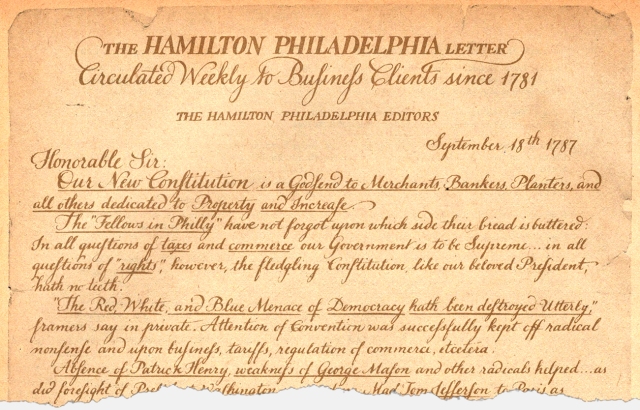 The 199th Birthday Book (1975), a National Lampoon newsstand special edited by Tony Hendra, is not as overwhelming as NL‘s high-school yearbook and Sunday newspaper parodies, but it takes the same care with details and leaves few patriotic icons ungored. Its bogus artifacts include an 1876 Electoral College humor magazine, “The Spittoon,” and three pages of Kiplinger-style investment tips from a hard-nosed Alexander Hamilton unlikely to inspire any musicals. 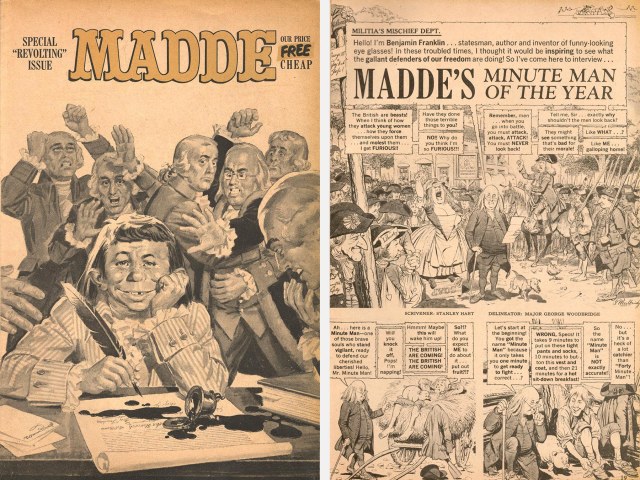 Mock-colonial scenes by Norman Mingo and George Woodbridge in Madde (1976),

“Madde,” a 24-page, comic-book-size “Centennial Year [sic] Collectors’ Item” in Mad Special #19 (Fall 1976) subjects the whole Revolutionary era to the Usual Gang’s usual treatment. (I’m still not sure Dave Berg was entirely in on the joke when he did “The Lighter Side of Valley Forge.”) The Onion, founded twelve years after the Big Whoop, did its bit in 2008 with a 225-year old, eight-page issue dated October 6, 1783, early in the nation’s first post-war era. “40,000 Pounds of Slave Have Been Lost at Sea,” one headline announces — a bit of deadpan brutality worthy of the 1794 “New Times.” —VCR 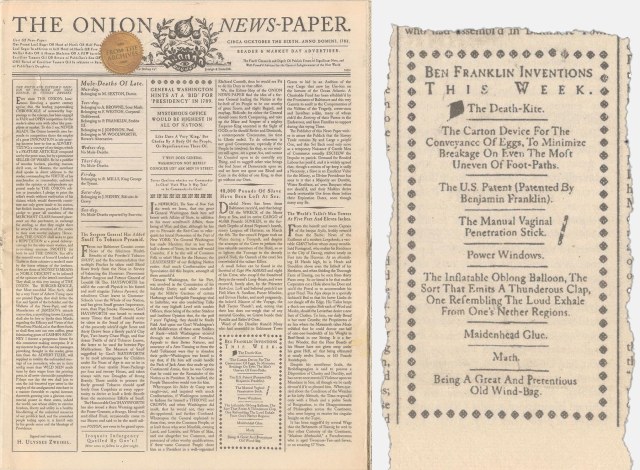 I'm a semi-retired freelance cartoonist in Durham, N.C., who's been collecting newspaper and magazine parodies for over 50 years.
View all posts by Cullum Rogers →
This entry was posted in Newsstand Parodies and tagged 1970s, 2000s, Kiplinger Newsletter, Mad, Magazine, National Lampoon, The Onion, Time. Bookmark the permalink.