College humor mags were prone to grumble-brag about how much time and effort they put into parody issues, but they could turn one out quickly enough with the right motivation. Take Duke University’s Duke and Duchess (1936-51), which sprang into action in the fall of 1949 after Look devoted six pages to homecoming celebrations at hated rival UNC. Look had shot the feature the previous November, when the Tar Heels, led by two-time All American Charlie “Choo Choo” Justice, skunked the Blue Devils 20-0 in Chapel Hill. It was published in the issue dated October 25, 1949, which came out around mid-month. The D’n’D’s response appeared November 19, the day the two schools clashed again at Duke’s homecoming in Durham.

“Dook” is so well done it’s hard to believe editor Art Steuer and staff put it together in only four weeks — or less, as it likely spent a week at the printer. The highlight is associate editor Walt Wadlington’s almost shot-by-shot spoof of Look’s account of the big weekend “as it was lived by Betty Lokey, pretty, 21-year-old senior from Raleigh, with her date, Jake Bowman.” The D’n’D’s version followed “Gertude Abernathy, 14-year-old senior from Low Point” and date Rudoph Ballentino (“a typical Carolina man” whose ambition is to own a liquor store) from their first meeting in a pool hall Friday morning through Rudoph’s drunken collapse on Sunday. Duke sophomore Kate Bullington and senior Earl Humphrey gamely posed as the mismatched couple. 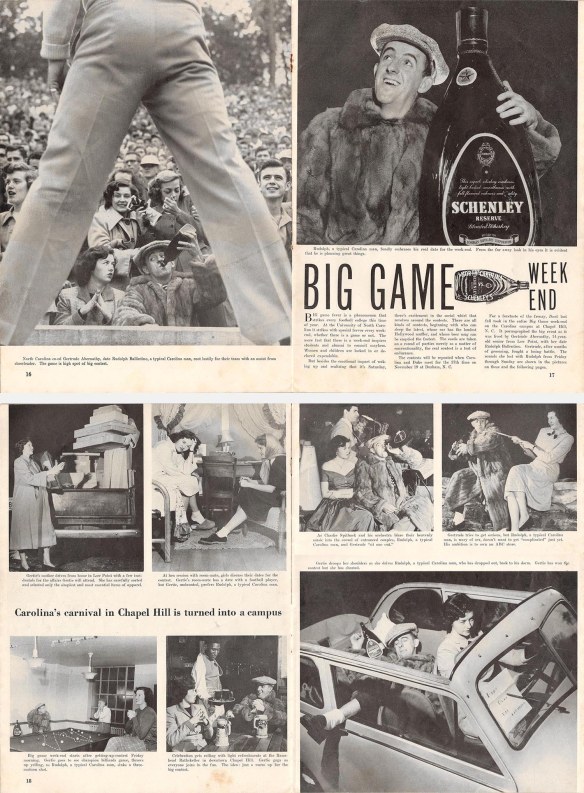 Almost every page of the parody was modeled on a specific page in the 10/25 Look. “Dook” aped Look’s lead story on FDR’s legacy with a similar take on one Hubert Humperdink. (“MYTH: He founded Duke University under the fictitious name of Benjamin Duke. FACT: He did found the University of North Carolina under the fictitious name of North Carolina.”) There were also fake letters to the editor, a “Dook Photocrime” and a version of Look’s most-parodied feature, the Photoquiz.

A profile of the unkempt mountaineer who cared for UNC mascot Ramses the Ram might strike current readers as too broad for effective satire, but Bob Jordan’s reporting was strictly factual. George B. “Bushy” Cook was a former textile worker from Haywood County, N.C., who settled on a farm near Chapel Hill after World War II; he was Ramses’s official guardian from 1947 to 1957 and died in 1974 at the age of 76.

All this cleverness was not quite enough to push the Blue Devils over the top on game day, however. Led again by Justice, the Tar Heels thwarted a last-minute field goal attempt by Duke to preserve a 21-20 lead in the closest game of the season for either team. The pen may be mightier that the sword, but it proved no match for the Choo Choo.   —VCR

Remember my scare-quotes in the last post regarding “annual” parody issues of college humor magazines? I used them because most college hu… I’m tired of typing that … most CHMs, even in their 1920s-50s heyday, didn’t put out a major parody every year.

(By “major,” I mean a full-length parody of a national, or at least non-student, publication. This rules out every collegian’s favorite punching bag: the campus newspaper. Such papers are so ripe for parody that, in the absence of a CHM, student journalists will gleefully do the job on themselves, usually on April 1 or in the last issue before exams.)

The Harvard Lampoon may be the source of the “annual” misapprehension. Early on, its parodies really did appear every year: 27 in the quarter-century from 1919 to 1943. (Here’s a list.) They also came thick and fast in the ’60s, including “Pl*yb*y” (1966) and the brilliant but money-losing “Life” (1968). Since then, the Lampoon has produced a national parody roughly once every four years, and the intervals are getting longer. In the past 25 years there have been only two: “Premiere” (2005) and “National Geographic” (2008). Today’s ‘Poonies would rather parody best-sellers like The Hunger Games and websites like The Huffington Post, which inspired 2014’s online-only “Huffington Psst.” Links to the “Huffington Psst” no longer work, but copies of the Lampoon’s 1917 “Vanity Fair” still do. Advantage: print.

Others with long parody streaks include the Yale Record in 1954-67, the Ohio State Sundial in 1947-60 and the Stanford Chaparral in 1949-61; Chappie’s run ended with an item called “Layboy” that got the mag shut down for a few years. No doubt more examples are tucked away in college archives, but I suspect they’re exceptions. In every complete(ish) CHM collection I’ve examined in person or online, the parody issues are distributed fairly randomly. Four examples: 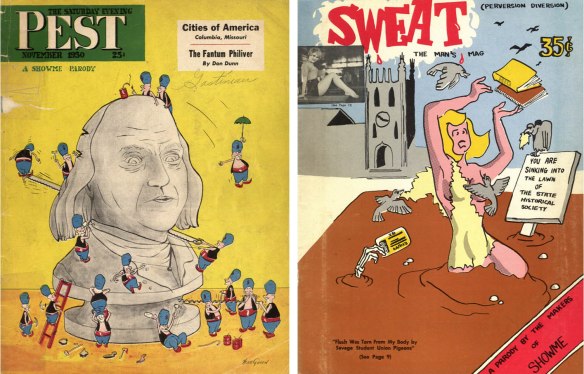 Showme’s experience proves how tricky parody issues can be. “Sweat” was neither well-done nor popular, but its aroma of he-man raunch was strong enough to get the magazine shut down for over a year. “It included a parody of the life of a house-mother … who tried to trap a male janitor in the laundry,” co-editor Dale Allen said later. “University house-mothers were outraged by this affront to their dignity. They demanded that the university cease publication of this scandalous sheet … [and] the publications board … pronounced a death sentence.”

The “Pest,” on the other hand, succeeded editorially but failed commercially. It was Showme’s most elaborate parody at 52 pages, some enhanced by spot color; highlights included a nonsensical short story by editor-in-chief Jerry Smith and convincing imitations of famous Post cartoonists by artist Glenn Troelstrup. “Unfortunately, the very costly issue was late in arriving, and [was] sold on the worst day of the week for student activity on campus. It was quite a monetary loss,” Smith recalled. Promo ads had promised the “Pest” would be Showme’s “First Annual Parody,” but instead it was the last to fill a whole issue. Who knows how many “annual” parodies at other schools ended up in the same position? — VCR