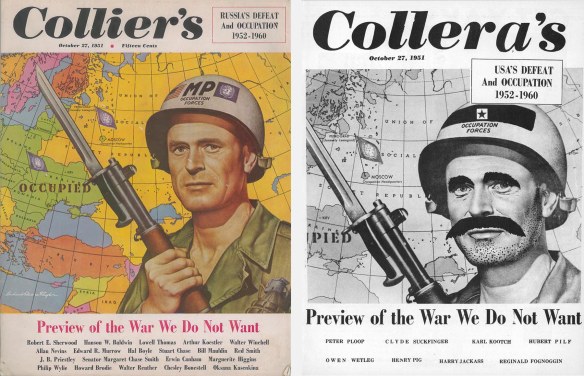 Magazine parodies rarely focus on one particular issue of their subjects, but the “preview” of World War III that filled Collier’s on October 27, 1951, made a big enough splash to earn its own spoof. Printed copies are scarce, but luckily both have been posted online in their entirety. (Links above.) Together they capture the nation’s jittery mood during the coldest years of the Cold War, between the outbreak of fighting in Korea in 1950 and the death of Stalin in 1953.

Collier’s’ what-if was assembled by associate editor Cornelius Ryan, future author of The Longest Day and A Bridge Too Far, after “study and consultation with top political, military and economic thinkers, including high-level Washington officials and foreign-policy experts.” Supposedly written in 1960, it begins in 1952, when a bungled Soviet attempt to assassinate Yugoslavia’s Marshall Tito sets the tanks rolling. The Good Guys eventually win, but only after millions on both sides die in A-bomb attacks. (Alt-history buffs should read Ron Miller’s detailed play-by-play at GorillaWorldPress.com.) After that bitter pill, a score of writers from Arthur Koestler to Walter Winchell share their visions of the next postwar world, where communism is defunct and Moscow hosts fashion shows.

The assumption there would be a world post-War No. 3 may strike today’s readers as the least likely part of the scenario, especially after they see Chesley Bonestell’s lurid, full-page paintings of the Kremlin, U.S. Capitol and other landmarks melting under nuclear fireballs. But the hydrogen bomb was still under wraps in 1951; A-bombs were relatively small and hard to come by, and the dangers of fallout largely unknown. Within a few years all that changed, opening the gates for apocalypses like On the Beach (1957) and Red Alert (1958), the basis for Stanley Kubrick’s Dr. Strangelove. 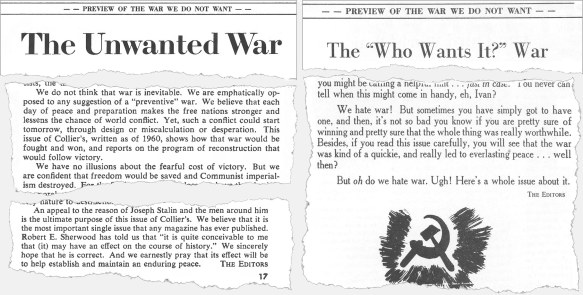 The sober realists in Collier’s roundup could still picture total war ending in victory — they’d seen it happen, nukes and all, just six years earlier — and the contributors who had dealt with Stalin’s regime weren’t shy about hailing its demise in essays titled “Freedom at Long Last” and “We Worship God Again.” Lest this seem a bit trigger-happy, the editors reminded readers this was a “PREVIEW OF THE WAR WE DO NOT WANT” across dozens of pages in prophylactic capitals. Meanwhile, all the usual features and fillers were either dropped or drafted into service, including the usually featherweight love story and cartoons. Mike Ingram of bookfightpod.com recently called the result “one part anti-communist propaganda and one part teenage war fantasy.” Some early-’50s readers felt a similar disconnect: As the parody put it, “Oh, do we hate war. Ugh! Here’s a whole issue about it.”

That jibe appeared not in some pinko-pacifist Greenwich Village organ but in Shaft, the off-campus humor magazine at the University of Illinois in Urbana-Champaign. Set up by returning World War II vets as a for-profit business, Shaft at first pledged “to avoid the pitfalls of smutty material which have wrecked every previous attempt to publish a strictly college humor mag here,” the Daily Illini reported in 1947. In reality, it soon migrated to the gals-‘n’-gags end of the college-humor spectrum, correctly assuming its mostly male readers would overlook primitive design and sloppy paste-up if given enough raunch. Future film critic Gene Shalit and Mad writer Larry Siegel boosted the satire content in early years, while an ambitious young man named Hugh Hefner supplied cartoons.

Shaft was a headache for U. of I. officials from the start, despite never being their baby. The end came when copies of the “lewd” April 1954 issue were sold to high-schoolers in town for their statewide basketball tournament. Offended parents blamed the U., which threatened “disciplinary action” against students aiding and abetting Shaft. The mag cut local ties and moved to Chicago, where it lasted another year.

Shaft ran only four magazine parodies in its seven years in Champaign. A 14-page “Saturday Evening Pest” filled the back half of the October 1950 issue, followed by “Esqueer” in the same spot in April 1951. The next school year brought “Collera’s” and a generic movie mag called “Succulent Screen” in January and April 1952. All four reused art and headlines from their targets, which if not cheating is still the laziest way to achieve a likeness. Only “Collera’s” put much satiric spin on its model, reversing WWIII’s outcome and Collier’s’ allegiance to expose the triumphalism behind the caveats and hand-wringing.

“Collera’s” main target, though, is not war as much as the kind of thinking that reduces war to a thought experiment with paper casualties. Though G.I.-Bill enrollment was falling fast by 1951-52, roughly a quarter of American college men that year were World War II veterans, and the percentage was higher at tech-focused schools like Purdue. The men who created “Collera’s” had either seen war up close or were steeling themselves to face it in Korea. College mags didn’t debate the draft and foreign policy in 1950-53 with the fervor they showed in 1940-41 before Pearl Harbor, but from Yale to UCLA, old jokes about the consequences of flunking out acquired a sour edge.

Armageddon and absurdity in Collier’s and “Collera’s.”

Some pages of “Collera’s” are typical collegiate wackiness (the decisive battle becomes a Russian assault on U.S. canned tuna reserves). Others view official wisdom and motives with a skepticism that seems more late-’60s that early-’50s. And when the parody translates Collier’s’ uncomfortable mix of righteousness and realpolitik into Russian-accented gangster-speak (“This is only what you might be calling a helpful hint — just in case!“), it sounds positively contemporary.   —VCR