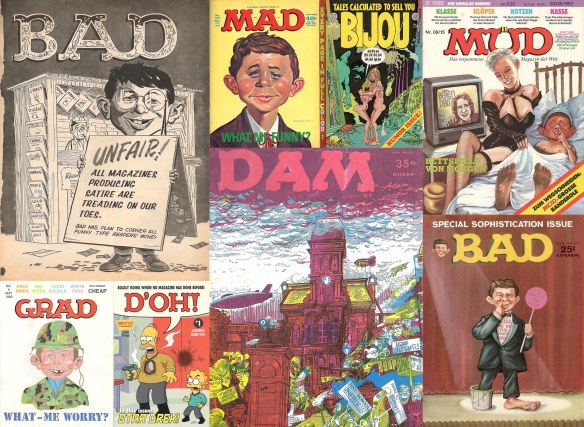 Some folks can’t handle success. Last year, Mad (b. 1952) passed Judge (1881-1947) to become the longest-lived U.S. humor magazine, newsstand division. This summer, it announced its October 2019 issue — number 9 of the current series — would be the last to run all-new material. Number 10 has since emerged looking just as new, so the obits need updating, but number 9 is still a keeper for its clever recreation of Mad’s mid-’60s heyday.

The “Special Taratino Time Warp Issue” — actually, the first twelve pages plus covers — began as a prop in Quentin T.’s latest film, Once Upon a Time … in Hollywood!, set in 1969. Leonardo DiCaprio plays Rick Dalton, a fading TV star whose one hit was an early-’60’s oater called Bounty Law. Tarantino commissioned Mad’s Tom Richmond to forge Jack Davis-style covers of Leo-as-Rick for Mad and TV Guide. The job grew to include a five-page Bounty Law spoof, “Lousy Law,” written by Andrew Secundo and drawn by Richmond in a fine pastiche of Mort Drucker’s early duoshade work. (They also did a second, digest-size parody for the film’s high-priced deluxe home edition.) “I was totally blown away by how much screen time [the art got] and how big it was displayed,” Richmond told the Washington Post’s Michael Cavna.

“Lousy Law” is the heart of the “Time Warp,” which also recycles Harvey Kurtzman’s nymphs-and-satyrs nameplate, an early Al Jaffee Fold-In, and real and fake ads. Peter Kuper apes Antonio Prohias’s “Spy vs. Spy” look, and Jon Adams approximates Dave Berg in a “Lighter Side” that links then to now and ushers in the rest of the issue. It’s a good-looking piece of self-kidding nostalgia and a convenient excuse to run this semi-comprehensive list of parodies of Mad. (For parodies in Mad, see here.)

The list doesn’t include the dozens of wannabes examined in two excellent books: John Benson’s The Sincerest Form of Parody (2012) and Craig Yoe and Ger Apeldoorn’s Behaving Madly (2017). Nor does it note every publication that morphed a cover subject into Alfred or faked a Fold-In. The following vary in length and quality, but all have some heft: Most run three-plus pages and parody several articles; the handful that don’t have a mock cover are so noted. 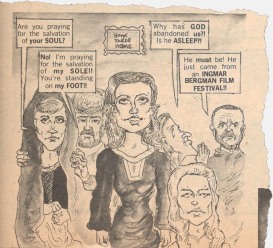 The cover, “Spy vs. Spy,” Fold-In, Don Martin and “Lighter Side” are the most copied features, by my count. Only the bravest parodists attempt Drucker-style movie satires: The most successful before “Lousy Law” are Ernie Colon’s “Citizen Gaines” in National Lampoon and Jeff S. Martin’s “Seventh Schlmiel” in the Harvard Lampoon’s “MADvocate,” which is by far the best student spoof. Also the briefest.

Parodists have viewed Mad with feeling ranging from adoration to contempt, but their laughter is mostly affectionate. I’ve sorted them into four groups based on attitude and affiliation: the Usual Gang itself,  rivals and critics, college humorists, and miscellanous fans.

Mad could kid its own formulas but had no desire to share them. In the comic, Kurtzman and Wallace Wood namecheck eleven rivals, including EC stablemate Panic, then break the fourth wall to “point out the various routines” in “a typical-type lampoon” of the 1953 film Julius Caesar. The assumption that Mad pioneered those routines hovers unspoken. By contrast, “How to . . .” openly and sourly attacks Mad-the-mag’s copycats, some of whom sassed back. It’s less a parody than a humor-mag parts catalogue, but it reveals the professional pride behind the what-me-worry facade. 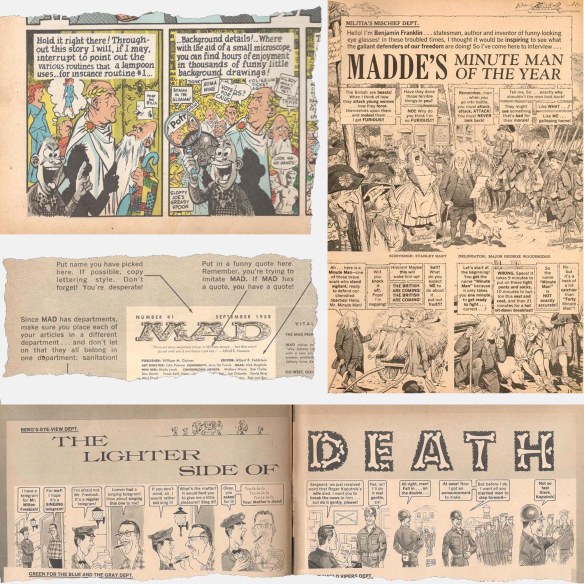 Later self-parodies are less meta. “Some Mad Articles You Never Got to See,” by Frank Jacobs, presents a dozen that supposedly “ended up dull” or otherwise misfired. Most are bland except “The Lighter Side of Death,” a cringe-worthy takeoff of Dave Berg drawn by Berg himself. In “Madde,” the Gang travel back to the Revolutionary Era for some Bicentennial satire. Lou Silverstone does the same for Biblical times in “The Book of Mad,” cramming a Noah’s Ark cover and seven story ideas into five pages.

“How To Put Out an Imitation of Mad” didn’t go unanswered. Loco ran “How to Be A Copy-Cat” in October 1958; the next month Frenzy reprinted bits from Judge, Ballyhoo and the old Life in “How to Take All The Credit For Originating a Humor Magazine.” Thimk and Frantic piled on in December with parodies of the original story. The biggest pushback was “Bad,” a six-page look at “the great humor magazine that invented satire” (sarc.) in This Magazine Is Crazy, by future Mad and television writer Gary Belkin and artist Tony Couch, Jr. It mocks several long-gone features including Bob and Ray’s skits and the t-shirt ad. Trash delivered the most recent assault in its March 1978 debut; “Mud” looks a bit like Mad, but so do the 42 derivative pages around it. Though uncredited, it’s likely the work of  Trash editor Tony Tallarico.

“For some time I too have been intrigued by the idea of doing a takeoff of Mad . . . and I wondered if it could be done,” Mad’s Larry Siegel wrote Esquire after its “Bad” appeared. “Well, I just saw yours, and believe me it hasn’t been done yet.” He went on to call the parody “cruel, vicious” and “more heavy-handed than Mad at its worst,” and ended with: “The guy who did your piece should have studied his subject more. You don’t do a takeoff of Mad simply by filling your article with ‘mainly,’ ‘gang,’ and ‘ecch.'” Siegel was too kind: Mad à la Esquire is an unrecognizable stew of horror comic, gags-and-gals humor and bathroom graffiti. Illustrator Blake Hampton may have glanced at the source material but didn’t bother imitating specific artists.

By contrast, National Lampoon’s John Boni, Sean Kelly and Henry Beard approached the job with the intensity of  ex-lovers. Though uneven, their “Mad” (see also here) comes closest to meeting Siegel’s standards — unlike the two-page filler “You Know You’re a Grown-Up When . . .” six years later. Munich’s Hans Gamber translated these and other NatLamp pieces in his spoof of Mad’s German edition, “Müd” (which, with umlaut, means “Tired”). I believe it’s the only Mad parody published outside the U.S. San Diego comic Barf offered humor in a punk-grunge-anarchist vein from 1990 to slightly later in 1990 (three issues); it gave fuddy-duddy Mad the finger in a few snide pages and is mainly notable for beginning on the back cover.

Mad was required reading for college humorists in the 1950s and ’60s, but most knew they lacked the chops to make a reasonable facsimile. The Syracusan tried anyway in March 1957, when black-and-white Mad was just two years old. “Dam” contains nearly 30 pages of original illustrated stories; many are funny, but they’d never pass for the real thing. Yahoo’s “Mud” and the Pointer’s “Grad” are cruder, though “Mud” found a clever way around Mad’s plug-free purity in “If Comic Strip Characters Patronized Our Advertisers.” 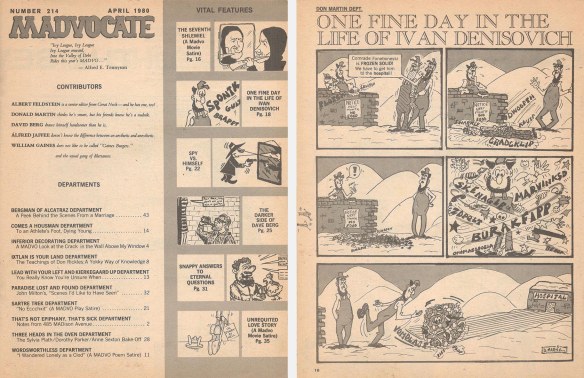 The Lampoon’s mashup of Mad with the highbrow Harvard Advocate starts with a strong premise and dispatches it in five brisk pages: Contents, Movie, “Don Martin,” Fold-In. Future Simpsons showrunners Mike Reiss and Al Jean, both ’91, contributed. Gargoyle’s parody is the big unknown: The 1958 Michigan yearbook says “this year’s Garg staff . . . satirized Mad,” but the Michigan Daily’s reviews don’t mention it. Anybody got a copy?

Sometimes, kids who fall in love with Mad grow into adults with access to printing presses; the results can turn up anywhere from porn mags to earnings reports. In 1967, Wayne Pierce drew an Alfred E. Neuman cover and “Ham vs. Ham” for the amateur radio monthly, 73. (The title is short-wave for “Best Regards.”) R. Crumb, Bill Griffith and other heavyweights mocked each other’s creations in the eighth and final issue of Bijou Funnies in the spirit of Mad comics. Editor Jay Lynch wrote an EC-style anti-censorship editorial and parodied Gilbert Shelton’s Fabulous Furry Freak Brothers. The cover was drawn by fabulous though not furry Harvey Kurtzman, who started the whole thing. 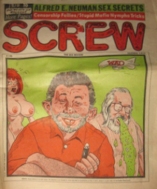 Screw’s August 1, 1988, front shows owner Al Goldstein grinning gap-toothed beneath the headline “Alfred E. Neuman’s Sex Secrets” as his old pal Bill Gaines vomits in the background. (Don’t ask how Screw treated people Goldstein didn’t like.) Inside are a long interview with Gaines and X-rated spoofs of Berg, Martin and the spies. Those features also turn up in Hustler’s 1995 salute, along with “You Know Your Girlfriend’s a Slut When…” and similar delicacies. It’s one of the longest Mad parodies at thirteen pages and captures Mad’s look and rhythm, but the humor ranges from juvenile to hateful and too many panels are “improved” by ‘shopped-in nudes.

Chunklet was a music and comedy magazine out of Athens, Georgia, known for its putdowns of “overrated” acts (basically all of them) and unhurried schedule (twenty issues in fifteen years, the last in 2008). Issue #14, undated but copyright 1998, says “completely Mad” up front but delivers only a bleakly funny “Pomo Spy vs. Pomo Spy” by Ted Rall and an advertiser’s Fold-In. There are clues that a longer parody was planned and dropped: Chunklet.com calls #14 “The Mad Magazine Issue, a.k.a. The Cease & Desist Issue.” The cover of The Comics Journal #225 was painted by Kelly Freas, Mad’s cover artist from 1958 to 1962; TCJ also imitated Mad’s contents, letters pages and Fold-In to plug interviews with Jaffee, Jack Davis and Al Feldstein.

Cognex Corp. of Massachusetts makes robotic gadgets that can see defective products on assembly lines. In 2002, founder Robert Shillman got so “MAD about the negative effect of the worldwide economic slowdown” he made it the theme of the company’s annual report. The usual one-pagers are present, all involving gags about machine-vision quality-control systems. Highlights are the uncredited Norman Mingo-style cover and the very idea of doing such a thing. Jab was a humor mag out of Birmingham, Alabama, in the early ’90s that doubled as a sampler for publisher Frank Cumming’s design firm; all four issues contain Mad-like illustrated satires, but only #1 makes the connection explicit.

Simpsons Comics #203 may be the most loving tribute: The lead story is about Krusty the Clown’s attempts to profit off Bart’s hand-drawn comic book “Bad” (renamed “D’oh!” because the title was too close to goth monthly “Sad”). The flip-side samples “D’oh” itself, bending the usual Simpsons line just enough to hat-tip Drucker, Martin and Aragones. Bongo Comics shut down last October after Simpsons Comics #245, and Mad is tottering, so I’ll close with the final panel of “The Rise and Fall of D’oh.” —VCR 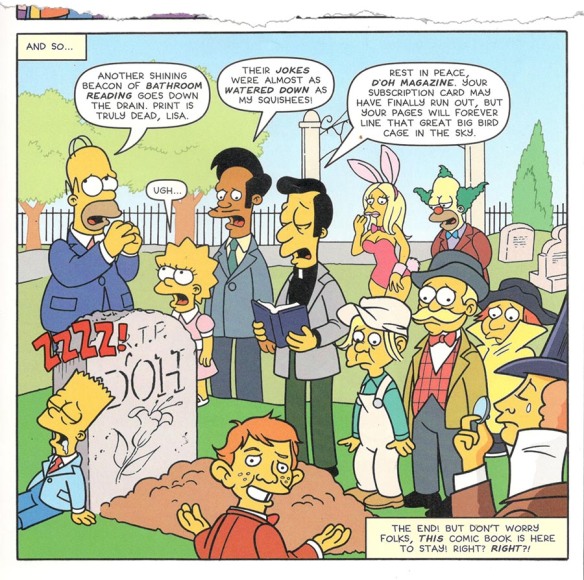